Community Spotlight: Let's get to know Steven from Reddit!

We want to get to know our community. And not only the big ones you already know and love, but uprising content creators or even anonymous fans, too. No matter if our community members produce YouTube videos, develop mods or just want to share their personal and unique Farming Simulator story - this is the place to introduce them!

Let's get someone in the spotlight you definitely do not know: Steven! No, he's not an uprising Streamer, YouTuber or anything like that. But he had something to share and it looks delicious. That's it - and that's more than enough to have a talk! Although, he also has a remarkable amount of hobbies and some involve farming... 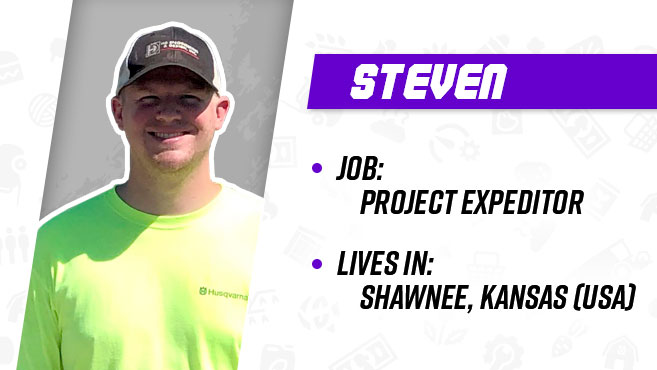 Hi Steven. Tell us a bit about yourself!

Steven: I am from the city of Shawnee, northeast of Kansas. For those reading this from places other than the United States - just look right at the middle of the country and you’ll probably be pretty close. I work at a large EPC (Engineer, Procure, Construct) firm that does many different jobs. Anything from power plants, to transmission lines, food production, chemical plants or oil and gas refineries. Pretty much if you ate it, drove it, or it lit up your house, a firm such as the one I work at had something to do with it, albeit far upstream. I am a project expeditor. Essentially, I kind of act as a go between, communicating with vendors, project management, engineering, and construction to make sure that the team is informed and hopefully help keep the project on track. 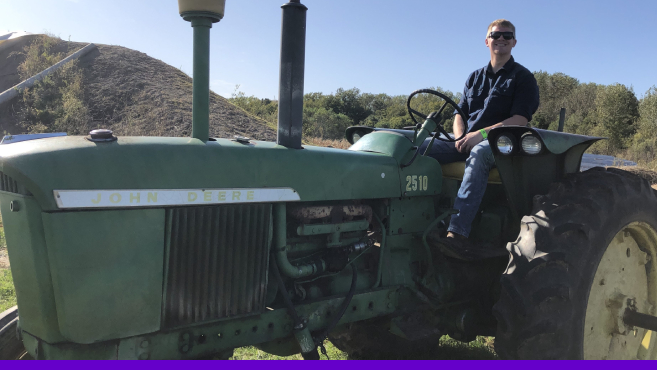 When not at work I love to be outside. I'm an Eagle Scout and love to fish, camp, hunt etc. Additionally, I like to do work at the farm land that my family owns. Primarily land maintenance, fences, brush clearing and other such tasks. I enjoy welding, and boating and model making as well. I also love to scuba dive and used to be a pole vaulter. My family has a few bee hives that I like to help take care of with my dad (mainly holding things and passing him tools) which is a fun thing for us to do together.

Finally, as we should all have guessed, I very much enjoy playing Farming Simulator 19! Also very important, I have a dog named Sully that is in fact the goodest boy!

We found you because of a picture you shared on Reddit. Your sister made a farming themed birthday cake. How was it and how did it taste like? And: Belated happy birthday! 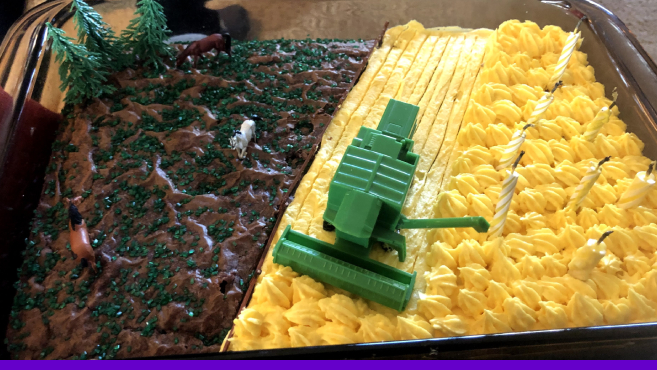 Steven: Thank you for the birthday wishes! For my birthday, my sister did decide to make me Farming Simulator themed brownies! They were fantastic, especially the Farming themed icing. Brownies are pretty much my favorite type of dessert! Interestingly enough, part of the reason that the farming themed cake was born is that my dad doesn't like icing so she had to find a way to make everyone happy and the divide between grain and pasture did just that!

The answer seems obvious, but why a farming themed cake? Was it a lot of work? Sure seems like it.

Steven: My sister loves to bake and likes to make themed cakes and such. She put a lot of thought into how she was going to pull it off! The icing itself is meant to be a cereal grain, she used green sprinkles for grass and the brownies themselves as dirt. She used 1/87 scale animals and vehicles! Despite my best efforts, I can’t bake to save my life so I guess I don’t technically know if it was a lot of work. But whether it was or not, I love that she took the time to make such a sweet birthday gift.

Why do you like to play Farming Simulator and how did you get hooked on the game?

Steven: I actually got hooked on the game junior year of college. First semester of that year I played Farming Simulator 17 on my roommates Xbox. I really enjoyed it and decided to get myself a copy. A few months later, after Farming Simulator 19 had come out, I had a major operation on my shoulder.

Spending the next four months in a sling with minimal usage of my right arm I had a lot of time on my hands. During that time, I found the game extremely relaxing. It was something that I could spend hours and hours doing without getting bored. There was always something new, be it an expansion or a new mod or just trying a different style of game play. And that is still true today. While now I have full usage of my arm, I still play the game most evenings as it has a way of relaxing me and helping me unwind after a long day.

Do you have a personal connection to agriculture? If yes, tell us more about that. 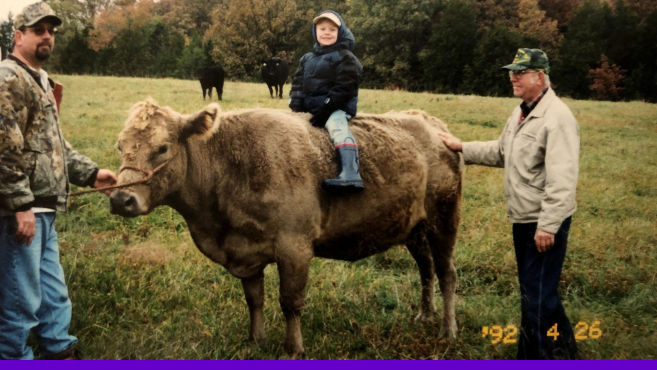 Steven: I guess I do to a certain extent. I did not personally grow up on a farm but I do have distinct connections on both sides of my family. On my mothers' side my extended family own and operate a black angus operation. It is now in its third generation. I grew up going and visiting the farm with my grandfather - my great uncle inherited it and my grandpa got drafted during the Korean war. It was always fun to visit with him and the rest of my family. I remember as a kid feeding bottle calves, watching steers get tagged, holding piglets, and riding in tractors.

On my dads' side, my grandfather purchased 130 acres in southeast Kansas back in the 1970s. Since I was born, that farm has become a major part of my life. Every chance we get we go down and do all sorts of things. Hunt, fish, ATV, and we actually now have bee hives! Growing up, I loved to sit and watch the tenant plant or harvest soybeans or winter wheat or whatever else he planted. Of course, back then I only knew corn and beans so he could have had a lot of crops that I wouldn’t have recognized. My dream is to move down to there and have my own little farm. 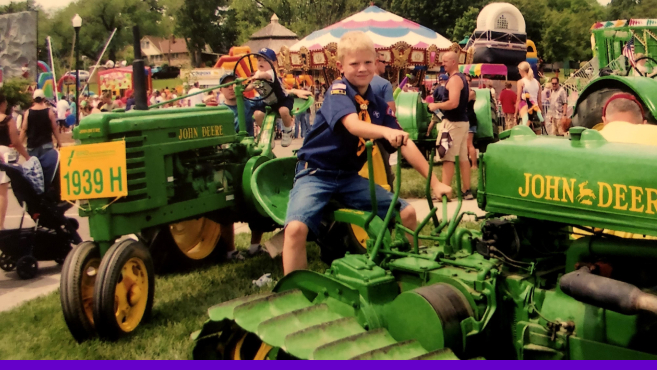 You’re an active Reddit user - tell us about the Farming Simulator community over there. Why should more people visit the subreddit?

Steven: I love reddit in general, For the most part, the people are welcoming and willing to help if you have questions. I like using this particular subreddit because I think its interesting to see all the different ways people play the game. I think it’s fun to see some people farming in ways that are more indicative of their regions.

Where I’m from, we see a lot of large, relatively square fields. With them we see a lot of large equipment. But some people like to use small equipment, some people like little odd shaped fields that would drive me bonkers! But you can see how others do it and I think that's cool. Another thing is seeing little tricks, people using mods or equipment for purposes not quite how its intended but that make things a ton more helpful. It’s also fun to watch WIP mods move along and think of how you’ll use them.

And what do you like about the Farming Simulator community in general?

Steven: The community is great because it’s so varied, no matter where you're from you probably have known a farmer, or if you haven't, you'll meet a few in the Facebook and reddit groups… and I think that's a good thing. At least here in the United States there is a huge disconnect between the general population and their food producers. While Farming Simulator is a very simplified and “gamified” version of what farmers deal with and do every day, I have met people in the community who said that this is the closest they have ever had to an interaction with a very important facet of our society.

I think that the interaction and the general respect people show each other is a good thing. People are willing to explain why you have to do things like deep tillage, lime, etc. to those who ask. And you can listen to how some people do things differently. I just very much enjoy the general camaraderie.

Based on your reddit activity, you seem to be into model farms, trains and ships, too. Tell us more about that!

Steven: I love working with my hands, I weld, woodwork, do basic metalsmithing - still trying to learn how. Models and dioramas are a great way to get my fix of tinkering while not making a large amount of noise, dust, electrical draw, or any dangerous tools/chemicals.

I like building models and making dioramas because you can stay busy for hours trying to get everything right and you can do it all in a 30cm² space. I have always been fascinated by ships, particularly cargo ships, but being from Kansas the closest ocean is a 767-mile (1.234km) drive from my home. So for the most part, models and movies are about as close as I get to ships.

You are a community member with a story, too?

Then get in touch! Now and then we'll focus on newcomers as well as veterans in the virtual farming community. If you're interested, shoot us an e-mail at community@giants-software.com.  Also, feel free to send us feedback on our blog!

#ThrowbackThursday Where can you find this playground? https://t.co/iESamS0qLr 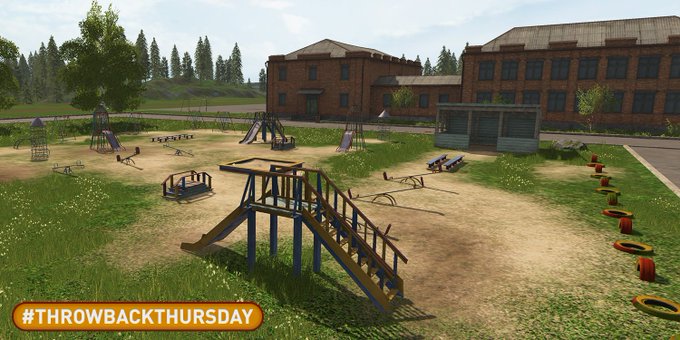 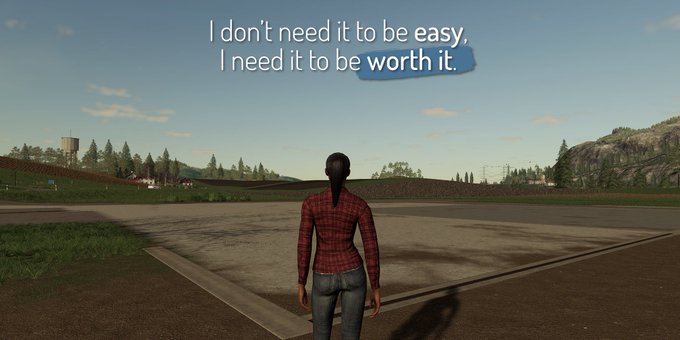