More vehicles, more perks and various optimizations: Shortly after Season 2 of the Farming Simulator League came to a spectacular end that saw Team Trelleborg victorious, we've updated the Tournament Client with some new additions and a variety of improvements.

Get more details on the client update over at fsl.farming-simulator.com! The beta version of the new Client is now available to download for free as a DLC for Farming Simulator 19.

Codes to download the Client are available for registered users on fsl.farming-simulator.com. Use the code in the "key" section on eshop.giants-software.com. Existing accounts can use their already provided code - new players get the code after registration.

It's #WeeklyFarming time, but scary! We want to see your spookiest Farming Simulator screenshots. Best ones get r… https://t.co/ANAmgHnR7I

We’re almost there, next week will be the last #FactSheetFriday! Then we ring the bell for launch on November 12. 🔔 https://t.co/mZjJHwZqrK 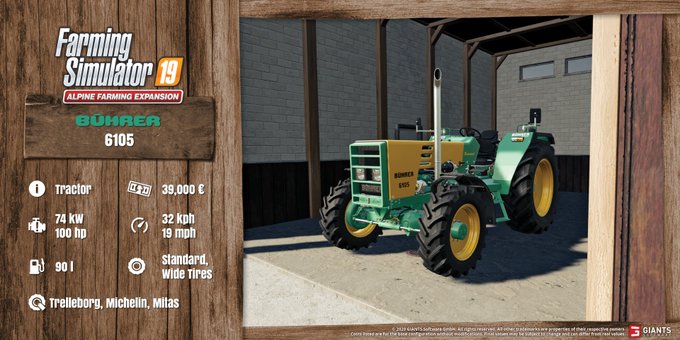 Guests, Raffles, Announcements, Seasons-Gameplay with @DjGoHam2 - we have it all. Tune in November 6th - especiall… https://t.co/POYbmQQzJH

#ThrowbackThursday to spooky Farming Simulator 17 times. What did we tease with this video? 🤔 #FS17 #Agriculture… https://t.co/jp2lIMCNHx

It's #WeeklyFarming time, but scary! We want to see your spookiest Farming Simulator screenshots. Best ones get r… https://t.co/ANAmgHnR7I